As we head off into the weekend, I’m guessing a fair amount of us will be partaking in a large glass of vino, or a double G&T, or a pint or 10 of something alcoholic alongside our Sunday long run … and why the hell not! it’s been a tough week what with kids, work and training, I think we’re allowed to let our hair down. But what would happen if us runners took our 2 favourite loves; running and alcohol, and mixed them together? … asking for a friend of course.

Now I’m a seasoned drinker but alas I’m not a seasoned runner, but good news! I have managed to pin down a man who is both… go me! So who better to ask, than the one and only drunk runner, and guest blogger, himself, the lovely Andy Collins. 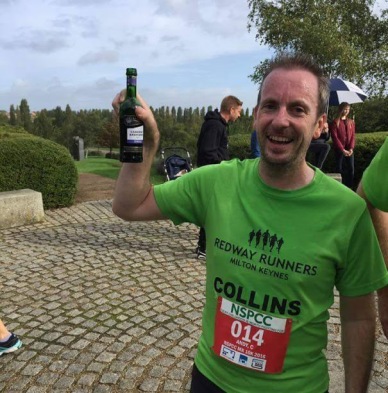 So SavageMum Runs jokingly said “you want to write a piece? Maybe on running and the benefits of drunk-running?” (sic) well unfortunately for her, and you, her readers, I have a fair bit of free time on my hands these days so…

Those of you who know me will know I like my wine and I like to run, lately more wine than running. So this is a subject I do know a little about. However how to put that into a readable blog… as those who know me also know I’m barely literate. The closest I’ve come to ever blogging before was answering a few questions for the Redway Runners “on the run with…” article.

Recently a friend of mine mentioned the Hash House Harriers to me, they class themselves as a drinking group with a running problem, meet at a pub, go for a short run end up back at the pub and drink! sounded right up my street so we went along to the next run held by the local MK branch (they are on every Monday night) they lived up to their tagline with much more drinking than running. Unfortunately even though they class themselves as the MK Hash a lot of their runs are held in the surrounding villages which as I don’t own a car, and like to drink far too much to be able to drive even if I did, I’ve not made it to as many of their runs as I’d like. However this sparked a new found joy mixing my two favourite things running and drinking… Since this day my friend and I have arranged a few running drinking days where we run up to 13 miles and drink 7 pints… neither of these things I could do on their own at the time, which shows you how drinking and running work so well together. The drink numbs the pain so you can run more and the running sobers you up so you can drink more, its just win-win (there’s even now a Facebook group to try and show others the joys of drinking and running (Running Pub Crawls in Milton Keynes)

A great fact about alcohol and exercise – alcohol interferes with the way your body makes energy (oh doesn’t sound like a great fact so far… but trust me, read on) When your body is processing alcohol the liver can’t produce as much glucose. We all know from the fact that millions is made every year from sugar based gels to keep you going, exercise loves using your glucose first to keep you preforming at top level. But… (and here’s the interesting bit) If your liver isn’t producing enough glucose, your body will have to burn fat for energy instead! And the pain numbing alcohol will let you perform at a higher level before your brain say no more! So there you go the ultimate weight/ fat loss, DRUNK RUNNING 🙂

However; I’m sure if you look it up science will give you a whole platitude of reasons why it’s bad for you to consume alcohol and exercise, but until the 1960’s (when those pesky French banned it!) it was common place for professional cyclists in the Tour de France to partake in beer, wine, spirits before and during races. Mainly used to dull the pain I understand, however if you’re going to cycle 2,000+ miles in a little over 3 weeks I bet you’d get a little bored of it also and so want to be a little tipsy to make the time go by more enjoyably 🙂 The only compassion I have to those professional cyclists was during the Tour of MK series last year where on day 6 of 6 consecutive races my body was tired and the start time of which meant I had a couple of hours to kill between work and the start… it also so happened that between my work and the start line there was a pub! With the thoughts of these great cyclists in my mind I decided to give it a go 🙂 As my first trail of racing and drinking, I took it easy and opted for Black Sheep IPA (5.1%) of which I had two pints before a slow walk to the start where I managed to not only run the 10k quicker than I did on day one of this gruelling event, but it was also my fastest 10k in a year.

One thought on “Running and Alcohol – Running Drunk”