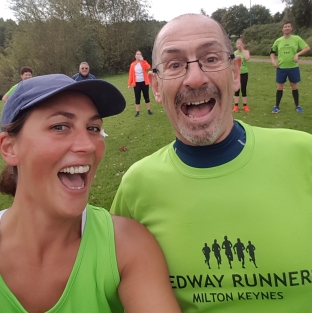 Not every super hero wears a cape and this man is no exception. He was my run lead on the January 2017 beginners course, he encouraged me, he motivated me, he made me want to be a better runner and now? ….. he’s my mentor for the MK Marathon and, by default, the London Marathon. This man is supportive to a fault and recently he’s become my stalker, hunting me down on Strava and asking me why the hell I haven’t run this week! But he’s the kindest and one of the most selfless people I know and I’m so, so proud to call him, not only my mentor but also my friend. Let me introduce you to the bestest (sic) mentor in Milton Keynes …. heck no! the whole of the UK and beyond … Mr Stephen Boothby, running champion extraordinaire…..

When #Savagemumruns asked if I would like to be a guest blogger it took me by surprise. My first thought was “can I do this?” Doubt started to appear in my mind. Then it occurred to me that this is what happens when we go for a run. We ask ourselves “Can I do this?” So after some procrastinating (and a bit of prompting and reminding from #Savagemumruns) I decided “yes, I can do this”.

The next question was “what do I write?” I have not done anything like this before. On reflection many have asked me why I run. What is my motivation? Why do I like running so much?  Therefore, after yet more procrastinating, I have decided to explain why I run.

My running “graduation” was at the Milton Keynes parkrun, just over two years ago, on a wet and windy miserable November day. I had a running buddy, Paul, who was known to be a fast runner. He asked what time I hoped to run the parkrun. My Answer was “I want to get under 30 minutes”.  The wind was blowing, the rain was streaming. The cold was going through to my bones. There was a lot of doubt and anxiety in my mind. I admit that at the time I did not want to run the parkrun. I was having second thoughts – “Why I am I doing this?” The event started.  Paul encouraged me right from the start. We ran on and on.Soon my legs were aching, my lungs were bursting, the wind felt like a hurricane with the cold rain lashing in my face. Paul kept me going. His support was invaluable. Finally I could see the end. We crossed the finish line. It felt like an eternity but crossing that line was a supreme feeling. I checked my watch – 29 minutes 55 seconds. I had done it. My legs were shaking and I was rasping for breath but this was exhilarating. It was emotional. I was so pleased and thankful. Ten weeks before I had struggled to run for one minute! I had just run 5k in under thirty minutes. I had not experienced anything like this before. It was brilliant. It was invigorating. I felt free.

I think I should explain a bit about my background to give some idea where I am coming from. My working life has been spent behind bars. I have worked from an early age (17 Years old) in the prison service in various roles, initially in administration, then as a prison officer, and now back into administration yet again (all be it with the NHS within a custodial environment). I have spent a life time in prison! I started work in October 1981! Prisoners serving life sentences have had less time than me in custody.

There have been good times and bad times. In the past the camaraderie between staff has been exceptional. This obviously helps you to keep going but prisons are oppressive, awful, and dangerous places. I have been witness to some traumatic events over the years; violence, self-injury, and death in custody. The last eight years, as a senior officer my role was Safer Custody/Suicide Prevention Officer. This involved working with self-injurious prisoners and helping and supporting the staff in the care of the prisoners.

The daily grind of working in a custodial setting can play on your mind. It is mentally and physically exhausting. Add to that the constant requirement to listen, talk, help, and support those men in crisis and do the same with the staff helping and supporting them – it becomes a very heavy burden to carry at times. This is just the tip of the iceberg. I could go on about the responsibility, audits, inspections, inquests, but I do not feel this is the place. Perhaps I should write a book? [Editors note: Do it Steve!!! 🙂 ] I have taken some big knocks, not just physically, but also mentally. There have been times when I have lacked self-confidence and struggled to keep going. I have discovered, however, that during my career I have a desire to help others to achieve and do their best.

I retired from the prison service four years ago, but within six months I was behind bars again. This time working for the NHS in a mental health unit. My office is a converted cell. The good humour and nature of my colleagues helps the days pass but you are forever mindful that you work in an oppressive and potentially violent environment. This is forever in the back of your mind and sometimes it is difficult to let it go.

The consequence of my time in prisons is that I need time outside. I need to escape. I love being outside.I need to escape the oppressive environment that is a prison and the daily grind that goes with it. In the past I enjoyed cycling, walking, gardening, and had an allotment (where I would disappear for hours). Then I discovered running.

My running adventure started just over two years ago when my wife, Sue, persuaded me to join a Redway Runners Beginners Group (a ten week course ending with a 5k parkrun). I had been running on occasions before, but these had been on my own and I did not enjoy them.  These runs had been hard, tough, and uncomfortable. They had made my legs ache and my lungs heave. They were not happy memories.

A friend, Annette, was leading the running group and this was her first beginners group. Sue wanted to join to start running and support our friend but was anxious going by herself. So being the good husband that I am, I did as I was told.

We started running with the group in September 2015 and within two weeks I was hooked. The memories of going out and running by myself had been forgotten. Running in the group was amazing. I had never experienced anything like this before. At the start of the ten week course everyone was quiet, nervous, anxious, and probably shy to talk. Few of us knew each other. Within two weeks friendships were forming and talking to each other whilst running was obligatory. This was fantastic. It is hard to believe that I was actually enjoying running and “looking forward” to going for a run. I was determined that I would keep this going.

Following my parkrun graduation I soon became a regular on the clubs runs and found that over time my strength and fitness were improving. I ran my first half Marathon at Silverstone in March 2016. The sense of achievement when I crossed that finish was exhilarating and emotional. I then ran nine other half marathons that same year. I still get that feeling when I cross the finish line. In 2017 I ran two marathons, Liverpool and Bournemouth. Both have their own stories but when you cross that line it absolutely fantastic. 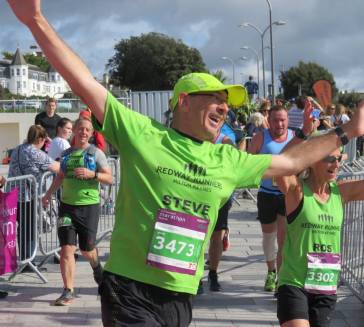 My enthusiasm and eagerness to help others led me to becoming a run leader. Again this is where my desire for others to achieve, kicks in. In the early days of running I found myself naturally helping and encouraging other runners. I helped out on other beginner groups and found it immensely satisfying to see others get emotional and be proud of their achievements. I then became a leader for beginner runs. There have been five beginner groups which I have had the pleasure to lead and I love seeing the runners who started in these groups out there running – still!. My reputation has grown as someone who cares, helps, and understands. This does me the world of good. For many years I have suffered from lack of self-confidence but the faith that people have in me drives my determination to do a good job.

The next step was to mentor another runner. The club runs a zero2hero programme. I am sure regular readers of #Savagemum know what this means. I am mentoring two wonderful ladies to run marathons. Training is tough and hard. There have been, and there will be problems, injuries, self-doubt, and tears, swearing, out bursts and everything else that can get in the way. They will cross that finish line and I dearly hope that they have the same feelings that I have experienced.

I feel free when running. No matter what the weather or the route, when running I am not thinking about work or any other burdens. I enjoy the outside and the fresh air. I enjoy the company. I enjoy the exhilaration and sense of achievement when I run. It is invigorating. 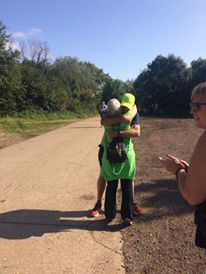 Love you Steve and Sue!!