Our heads give out long before our bodies do … so a lot of people have told me over the last few months. Being a #RebelWithoutAClue, I set out to bust this myth wide open and introduce you to a fellow Zero 2 Hero who’s head and heart has remained firmly in tact but who’s limbs are pretty much being rebuilt. In recognition of this chaps birthday today (Happy Birthday 🙂 ) I introduce you to the one and only Peter Galvin …. who just doesn’t know when to quit .. or even what the word “quit” means! Thank you for taking the time to write for me Peter … you’re story is pretty remarkable! 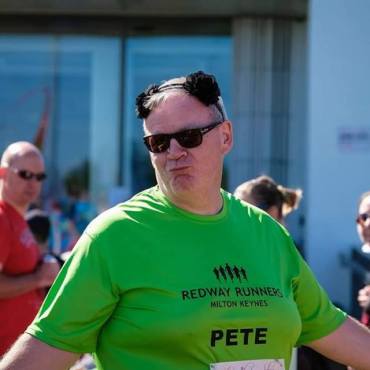 I have to admit I was shocked and surprised when Kerry asked me to write for her blog. More specifically she wanted me to write about my rehabilitation following knee surgery. Lord knows why, I am merely some old plodder, playing it for laughs and giggles at the back of the class.

We all tend to use social media to various degrees and I can be as guilty of this as much as the next person. But with regards to my rehab, I have been lax in keeping people informed about how I am getting on, which tends to mean that Sadie seems to field a raft of questions in this regard. Which I guess can leave a bit of an information gap.

So previously on ‘how does he keep moving?’ and in case you were not aware I had knee surgery last November 17th for a meniscus tear and while he was there, the surgeon also did some bone shaving to help with the general wear and tear (I mean a tummy tuck would have been nice as well!!) I also had a good old dose of cortisone in my knee, to help recovery and my hip got some cortisone to help with a labarum tear.

So, all good?? Of course!! In fact, been there, done that, even got a t shirt!! Yes, I was crazy enough to think a bit of physio and some taking it easy and I would be back running in January, albeit slower than normal but still outside. That was the initial plan! Simples!

Where did this plan come from?? Well abit was down to not listening properly to the physio and the surgeon and also from previous experience, you see about ten years ago, I had knee surgery to remove scar tissue from the ligaments on the left knee, I was still playing rugby back then and was back playing within 8 weeks. Surely the recovery would be same this time around? Wrong!

I forgot that I was older, not so wiser, and the surgery more complex! The first lesson is so learnt. Back then I was younger and the knee surgery was milder, therefore I was back playing rugby in a matter of weeks. Not so this time!

So anyways back to the subject in hand…rehabilitation, it is a slow and sometimes painful thing. As anyone who has had surgery would know. It takes time and you need to be a patient patient. And certainly, no more Dr Google!!

Also with any rehabilitation, you have to be flexible in your mind and adjust to various factors around you, one day is good, the next not so. So, my advice is to record everything, even on those horrible, I hated running type days, by looking and analysing the numbers I could find a little piece of silver lining that helps. Honest that helps a lot!

Rehabilitation means that targets are set, and changed, and you have to be flexible in regard to the aims and goals set. More so than when you are injury free and, dare I say it, training. I will admit that initially I was convinced I would be back in the bosom of the Sunday Step Up mid-January, no problem. Well that target came and went very quickly once I understood the level of work I had had done. It was mid-January before I could use an elliptical trainer!!

Once I finally got the go ahead from the Consultant to step up the activity levels, I would typically swim three times a week, together with some elliptical trainer most days. This was all I did for the first four or five weeks. I would slowly build up, a) because I had to and b) I lost an incredible amount of fitness over those weeks. If I recall this was 6 – 8 weeks after surgery.

Before that all I could do was some walking, building up from 10 mins to 20 minutes and then if no pain or issues build towards my very first target and goal. And one I checked and double checked I was allowed. The Lanzarote 5k in December. Yes I had seen that the 5k in Lanzarote had a 1hour 15min cut off, because it was part of a bigger event, so I planned to walk a 5km race!! First Goal set and achieved! 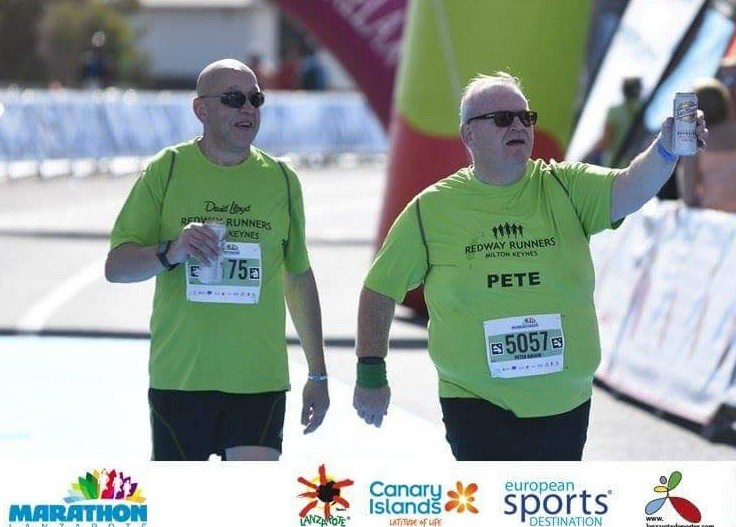 Rehabilitation can also be a lonely path. You have to do some of the work on your own. No-one else does this work for you. There are no short cuts. Certainly though, there are and can be a lot of doubts creeping in. Because I never wanted to be ‘that guy’ causing issues on a run, I did a lot of work in a gym on an elliptical trainer and in a swimming pool before I even attempted to step on a treadmill once again. Look at me, following the advice of a professional! Go Me!

So the target moves, and adjusts and moves again. Can I get a mile done pain free? Would the Barcelona Breakfast run be doable? Can I go back to the bosom of the Sunday Step-up group! Can I do a 5k parkrun? Can I get to 10k? Can I run on consecutive days? Well in the end, YES I CAN, and did. It wasn’t always easy and I needed lots of help and support along the way. But I did it!!! However, to explain, I still get some issues, normally aching and swelling. Which is perfectly normal at this stage.

Did I mention the ice?? No not those frozen blocks of water that you have in your G&T or your ciders. No this is the ice that for weeks would be applied to my knee to keep the swelling down! Yes please plenty of ice!

The key however is to believe. I am not naturally a positive person where injury is concerned, in fact for a pessimist I am quite the optimist. However I wanted to be running outside, something I never thought I would say ever. I wanted to have that ability that if away working, I can slip the trainers on, and go for a trundle. (Arizona 5.30am anyone?) Of course I may not be as fast as I was, but I can still be outside and still be moving and with time and effort get a little bit quicker as well.

You may have noticed that I suddenly posted my times concerning Colchester Parkrun, I was genuinely stunned and gobsmacked about how well things went, now by all means the improvement is relative, but I thought it a good time to share the level of joy I was feeling. It was a two lap course and when I saw the hill!! But to me, at least, and for now there was a chink of light at the end of the tunnel. For once the plan was moving in the right direction. That felt really good too!

If this was a Hollywood film, of course I would have run my Zero2Hero marathon at Milton Keynes on May 7th, having completed it gallantly after falling over at some point (of course), big stadium finish and the crowds cheering me on. Simon Pegg would play the part of me (Run Fat Boy Run!) and of course I already got the girl, the amazing and inspiring Sadie! (thank you wife!!)

Well the plan or target is and has been adjusted to complete the Marathon Relay, so I get the Big Finish as I am running the final leg, what an anchor! I am also doing the rocket the day before, just for fun and giggles, oh and the bling, it is all about the bling!!

But the story does not end there, dear reader, like any good (or bad) story there is a twist, isn’t there always!!! Remember that hip issue? Well the hip actually started playing up 15months ago, I had been diagnosed with a 3cm labarum tear in my right hip and in the intervening time I have had three opinions from a consultant and two professors, it appears that I have an underlying condition called FAI (FemoroAcetabular Impingement) probably developed in my teenage years and stems from playing a lot of sport. The upshot is that this impingement having developed over all these years has caused a level of osteoarthritis that looks likely will require a hip replacement sometime this summer.

To finish……There are far too many people to say thank you to for your words and help and assistance over the last few months so I am not naming you all. But if you spoke to Sadie to ask after me, or even to me, or ‘liked’ my facebook post or ‘kudos’d’ my Strava’. If you had a breakfast run with me either in Barcelona or Milton Keynes, if you just checked in on me then thank you for your help in helping me get to my goal 😊

For more information on FAI – https://www.oxfordsparks.ox.ac.uk/content/hip-hip-hooray#

Good luck Peter! I can’t wait to see you cross that finish line at the awesomely amazing Stadium MK.