Yes folks you read that right, me, a tubby pretend runner and mother of 2 decided it would be an awesome idea to run after a train but thank the lord it was ‘just’ a steam train .. after all, they don’t go so fast right? 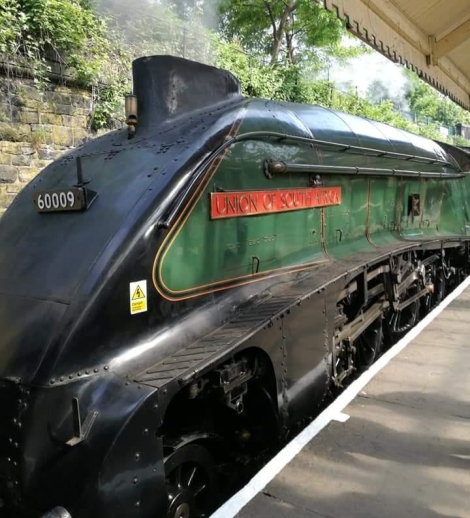 Well here’s a bit of “steam train” knowledge for you …. Probably the most famous and yet the slowest steam locomotive was The Flying Scotsman.  In November 1934 it became the very 1st train to be officially verified as capable of reaching 100 mph, next on the list from what I can see,  was The City of Truro which was capable of reaching speeds of up to 102 mph. Now compare that to the Virgin trains, particularly the Pendolinos which  can reach speeds of up to 125 mph and tilt whilst whizzing round corners, ensuring you share your lunch with the rest of the carriage, well all I can say is I’m glad it was ‘just’ a steam train I was chasing. We were racing the Union of South Africa, which is only 1 of 6 surviving and operational Class A4’s and is only mainline certified until April 2019 – so now it feels more of a privilege to have chased after it knowing we were potentially the last group of runners to do so!.

Anyway! We’ve established that they go fast, but could they get to the start line on time to blow their whistle and start the runners racing? Don’t be daft!! This is the UK after all and it would be unheard of for a train to rock up to Bury Station at exactly the right time!.  But again, a small delay isn’t the end of the world because this was a ‘fun’ run right? Er wrong again ..

So maybe I shouldn’t admit this .. I guess I’m not ‘SavageMum’ for any old reason, but at the start of every organised run I’ve done, I tend to look around and, rightly or wrongly, start to make assumptions about who I think I can slowly pick off over the course of the run.  Sometimes these assumptions are correct and as I plod passed people I still like to offer some genuine encouragement and check they’re OK because I’m not picking people off to be mean and I’m sure as hell not a competitive runner,  I’m merely trying to focus and get through a rather long plod. Unfortunately, as I stood hanging around waiting for the sodding train to turn up, I couldn’t help but notice that there wasn’t one person in this crowd that didn’t look like a fully qualified, bonefida athlete. I didn’t stand a hope in hell’s chance of keeping up with this lot so resigned myself to being the unofficial tail runner and just hoped upon hope that they would be kind and loop back to me (they didn’t … obvs) and that the course would be well sign posted!! Being lost in a field full of animals I’d usually only see on my plate with a side of horseradish or mint sauce in the middle of no-mans land didn’t sound very appealing in 24 degree heat.  Pretty much every single runner came kitted out with Camelbaks full to bursting point with water, trail running shoes – and not your standard £9.99 pair from Aldi’s, long socks and a fierce “I’m gonna beat that train” look on their faces, at which point my nerves kicked in and I wondered why on earth I’d thought this would be fun. 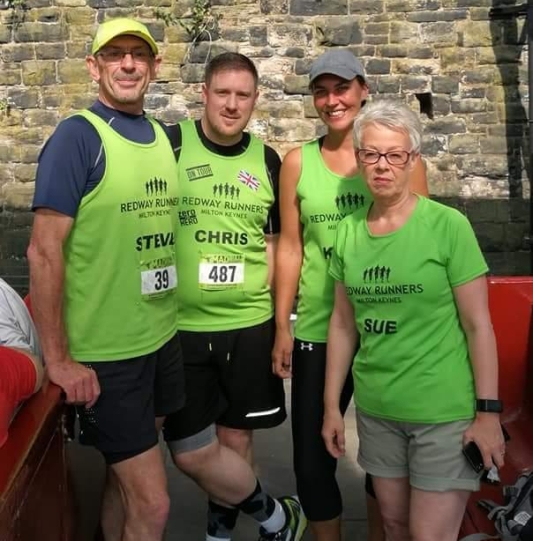 On the plus side, I wasn’t doing this run alone …. Oh no! I was of course, joined by my lovely mentor, his beautiful wifey and my Chief Cheerleader / Pit Stop Director / Fellow Hero…. So it became a Redway Runners on tour fab 4 v’s the Train (only the beautiful Mentors wifey was the lucky one of us who got to ride the train!).

So onto my next random thought of the morning …. surely to give the runners at least half a chance of beating the train, the organisers would allow us to cut corners right? … well … kind of! The runners were allowed to run through fields accommodating noisy sheep and cranky cows, we were allowed to scale 1:4 hills that carried on for miles on end and we descended down gravel paths that very kindly had steps the height of an average persons thigh, we ran through single file country tracks whilst simultaneously being attacked by stinging nettles, horse flies and thorn bushes, we ran alongside streams where the ledges were so precarious that a misplaced foot a millimetre in the wrong direction would’ve meant taking an early bath, we needed to make like mountain goats to scale sides of mountains (ok .. not quite mountains but by mile 8 that’s exactly what it felt like) and there was a fair amount of clambering over rocky paths, running through a gazillion and one “kissing gates” and climbing over styles oh! And have I mentioned the 5 horses backsides we had to very delicately jog passed in order not to scare the living hell out of them for fear of getting a hoof where a hoof was indeed not wanted?? No? well we did .. now I’m pretty sure that if the train had of taken the same route as we did, even I would’ve beaten it!.

As with pretty much all of my races recently, the sun shone through with a vengeance and some git turned the thermostat back up to way passed boiling point which is great for topping up the tan but not so great when there’s only 2 water stops which only provided half filled cups of water (I bow down to the superior knowledge of the runners wearing their camelbaks and apologise for my initial thoughts of you all looking like t**ts and taking this waaaay too seriously) but over coming this minor negative point,  one of the best things about running a different kind of race in a completely different location, is that you genuinely don’t know where the hell the finish line is going to crop up. The pre-race email stated that the course was between 10.5 and 10.7 miles depending on your GPS device, so of course as I’m walk/running/limp/plodding my way to the finish line I’m starting to tick off the miles convincing myself I’m almost there. My Garmin got to 10.2 miles and despite the pain I was feeling now in my left hip, I pushed on knowing … well at least hoping …  I was close to the finish line and sure enough, when I looked up from underneath my sweat-dripping cap there was my chief cheerleader / pit stop director / fellow hero waving his finishers t-shirt in the air having come back to find me (one day, I swear to god!, I’m going to be the one finishing a race fast enough to go back to find him!).  After plodding with me for a little bit and giving me a quick pep talk of “once you’re over this bit start running, the camera man is on your left hand side so smile and the finish line will be right in front of you, go Huntley!” off I went to end this race as I started it … with a great big smile on my face! A great big thank you to Mr Mentor’s beautiful wifey, Sue, for snapping these finish line photos and for waving at us from the luxury of the train and for hanging around for us to finish….. much love!!

After collecting my medal and t-shirt and guzzling as much water as I was allowed to guzzle it was decided that as we had just completed an extreme trail running experience and we had all finished in one piece, a visit to the golden arches was required.  Over an extra large Big Mac, fries and diet coke (don’t judge) we decided that despite its short comings, it was indeed a fantastic experience but I have since been banned from organising any more ‘fun’ events.

Soooooo! Next on the cards …… we’re Beating a Barge!!