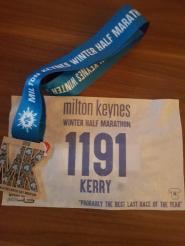 Well that’s it! The final race of the year over and done with, so now it’s time to put my feet up, crack open the wine and the nuts (and the mince pies and pretty much all the food I’ve bought way too early for Christmas) and not come up for air until the New Year…..

But before I consign my trainers to the shoe cupboard in preparation for their winter hibernation, a quick recount of a little plod I’ve just completed with a few thousand other crazies. It is the one, the only, the iconic and awesomely amazing (is that too over the top?) MK Winter Half Marathon.  Last year, I’d trained for it, I was up for it, I was ready … but it was rescheduled due to winter (go figure). This year, I’ve pretty much been tapering for this race since May, no training had been completed as part of this race, I’ve lost my mentor and, just to make things a little tougher, I was joined by an extra stone in weight, so you can image my “joy” at waking up on the Sunday morning to a cloudy sky, a little bit of a chill in the air, maybe the hint of drizzle, but no god damn snow when I needed it.  In fact I was so prepared for this race, I hadn’t got my kit ready the night before, there were no safety pins easily to hand, I didn’t bother fuelling, was barely hydrated enough to walk from the car to the start line and could only find 1 running sock in the ironing pile!.  Even with all of this going against me, I still hauled my butt out of bed and began to get ready for what I already knew, would be a painful plod.

As is pretty usual for me, I rocked up to the start line too late for the club photo and went on the hunt for the end of the toilet queue ….. the queue was so long and with only 10 mins before kick off, I had to make a quick decision! take part in the 2 mile portaloo queue challenge,  find a bush big enough to cover my modesty or run the first 10k with a full bladder – well the queuing was out obviously and given it’s winter and most of the bushes have lost their foliage and were merely clumps of twigs waving in the breeze, I kinda had no choice but to adopt the “pelvic brace” position and start plodding with a litre (I assume) of coffee sloshing around my insides and hope and pray that I made it to the next set of loos.

So with all of this happening in the space of an hour pre-race, I was expecting this plod to be worse than last year. My race strategy was take it slow and just chase down a 5k at a time and if that was too much, then I’d just plod the mile I was in …. 13 times over with the 0.1 for shits and giggles, only as can be seen in this picture – I was ooooh! so focused.. at mile 1! 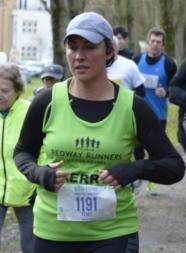 But actually, I remained this focused all the way through to mile 9 .. so much so that at the finish line, there were no “congratulations” or “well done’s” or “you did it’s” ….but there were a lot of “I shouted for you but you just ran passed me” and “you totally blanked me”…. ooops

As always, the Green Army support was awesome throughout, which is what makes plodding the MK Winter half so special.  They man THE best water stations in MK, they have the loudest cheers along with the loudest coloured t-shirts which always get us noticed by “outsiders”.  It worries me sometimes when I’m wearing that green tee – sometimes I wonder if people think we’re super speedy or super fit.  Don’t get me wrong, there are some club members who are utterly amazing, who can run like the speed of light but unfortunately I’m not one of them … as 2 chaps from out of town discovered when we got to mile 9. I spotted my old Lieutenant Coach holding the “golden fuel” that are Jelly Babies, so veered off  to my right to grab a handful, as I ground to a halt, 2 chaps shouted that I wasn’t allowed to stop as they’d been following me for 9 miles using me as an unofficial pacer … needless to say, I then used them to drag me round the last few miles.  Whilst we were waiting to get our t shirts, they told me that it was their 1st half marathon and they came in in 2 hrs 20 which was what they were hoping to do …. what an amazing achievement for a 1st half marathon, demonstrating once more that us runners are resilient, stubborn, determined and the nicest people on the planet.

The beauty of living, training and then running organised events in Milton Keynes is that you know the area, you know the terrain, hell! you may have even run part of it in training yet it doesn’t seem so tough in training … mainly because you plan your route and don’t shove a bloody great big hill in at mile 9 that goes on and on and on and …. well it felt like it went on forever… needless to say, if you live in MK you know that hill holds the best gift of all once you get to the top, and that 5k’s worth of down hill running all the way to the finish and that my friends, is why I crossed the finish line with an actual smile on my face this year – I didn’t hide under my cap when I saw the photographers on either side of the footpath (although seeing the final pictures perhaps I should have!) no siree……

I didn’t train for this run, but I did bloody survive it and damn! I was proud of myself just for this alone not only that but I came in just a teeny tiny bit slower than last year after a whole heap of training – surely that deserves a bit of kudos?! 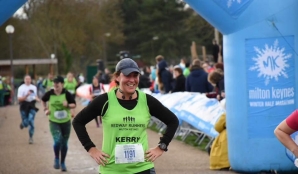 And even better than surviving a race I hadn’t trained for? ….. I ran the entire 13.1 sodding miles busting for a wee and STILL got to the finish line without wetting myself 😀 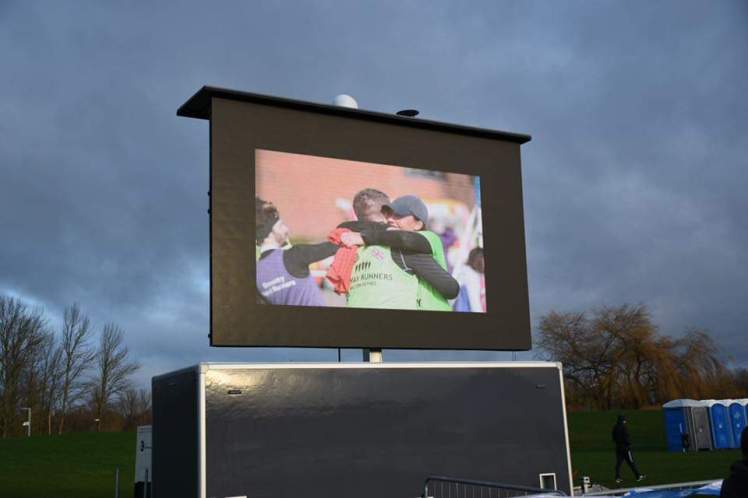 So however you’re finishing your own personal year of plodding … have fun, enjoy and stay injury free.. there’s another 365 days of this shit to come.