I’ll let you into a little secret … I’m meant to be studying right now. I’ve got my APMG Change Management Practitioners exam on Tuesday and desperately need to get some pre-course work studying under my, not insignificant, belt but .. ssssshhhhhh 🤫 … don’t tell the boss… or my Chief cheerleader/pit stop director/fellow hero/newly promoted running partner in crime. When they find out they’re going to hit the roof! but in my defence I have done 5 hours and 14 minutes non-stop studying so far, but still ….

As I’ve been diligently studying I came across something that resonates quite loudly with me, which may (or may not) help you guys…

Let me introduce you to Kubler-Ross’s “change curve” which is also sometimes referred to as the ‘coping cycle’ or the ‘human response to change’. 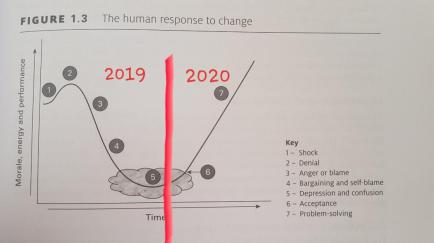 There are 7 stages of this curve and whenever something, either positive or negative, changes in our lives, we all spend a different amount of time working our way through these stages. From stage 1, ‘shock’ we work our way down through denial, anger/blame, bargaining and self-blame until we hit depression and confusion. Up until that point we’re attempting to hold on to, or revert back to, the existing or former situation. When we reach depression and confusion, we’re at our lowest point of performance, energy and morale and could quite happily wallow in this stage like a 🐖 in 💩 for a very long time if we don’t have a good support network around us. For us to get through this stage, there needs to be a level of acceptance; accept what has been and embrace what is before us. (Phew! this is all getting very deep,but hang on in there, the end is in sight!)

Understanding where you are and how you react to that stage plus understanding that you’re going to get out of it the other side, I feel is quite empowering. I spent 2019 in stages 1-5 … it’s THE most exciting thing knowing that I’ve already embraced stage 6 and stage 7 is waiting in the wings … (see boss! Chief cheerleader/pit stop director/fellow hero/newly promoted running partner … I’ve been studying!! and learning 💩)

Anyhooooo!! enough of that! I can’t concentrate, because today, THIS happened….

… the absolute joy, that is park run 😍 .. formally known as a child free Saturday morning lay in. To be fair, it almost remained as a child free Saturday morning lay in when my alarm failed to go off (ok! I didn’t actually hit the ‘set’ button 🙄 – genuine error, not an early attempt at sabotaging the marathon training, I promise). Waking up just shy of 8am to cries of “oh crap” was always going to get the heart racing and the adrenalin pumping for all the wrong reasons but never-the-less, the recent change in attitude didn’t have us shrugging our shoulders, brushing it off as a lame attempt and hiding back under the duvet, no siree. Instead it saw us up, dressed, coffee thrown down our throats and out the door in 32 minutes flat #SoProud.

Parking up and trotting off down to the start line gave us about a 5 minute warm up which is crap for some people but bloody amazing for us! the phrase “warm up” has never entered our vocabulary before so it’s another tick in the box on our very small list of “new year, new you” improvements. At the point in time when the little hooter went off signalling the start of PR, we were standing off to one side, paying no attention whatsoever, having a good old catch up with some lovely club members. It must have been a good 10 seconds or so before we realised and quickly joined the masses surging up the hill…. I do however, use the word ‘surging’ very loosely. It’s a park run! suitable for all people of varying shapes and sizes and all running abilities from plodders, to trotters, to speedsters and of course to walkers, plus it’s quite a narrow path and no-one wanted to get their Christmas trainers dirty 🙄 FML!

In addition to the varying shapes, sizes and abilities there were also a varying degree of accessories today, ranging from cute little headphones that block out all sound around you, making you oblivious to your surroundings and the people you’re tripping up as you suddenly veer off left to avoid a puddle (handy hint … it’s winter … there’s going to be puddles, if you don’t want to get wet and dirty, find yourself a treadmill #JustSaying), to dogs, who were better behaved than most of their humans, and to mums and dads pushing their running buggy’s, on a mission to prove that they’re fitter and faster than the average park runner ….. this point is valid though, having been there myself .. once … many moons ago! .. we are not worthy of running the same park run as you, you are clearly super human to be able to run at speed, with a push chair that remains both in tact and upright, at such a fast pace while narrowly avoiding other runners ankles, I am in total awe and will be sure to place you high up on my pedestal (a.k.a shit list) next time.

I am, of course, kidding (to a certain extent 😉), park run is awesome, the people who run it are inspiring and require a certain amount of kudos for getting up and running it. I loved being back, not just at park run, but also back out running. I used todays park run as a time trail for my marathon training and have accepted (see stage 6 above! 😂) that I’m back at the beginning of my running journey, needing to find the speed and distance I used to have. Theres nothing wrong in getting rid of that voice in your head that constantly reminds you, you used to be better than this. Trust me! that voice doesn’t have a clue what your body can achieve, so shut it up once and for all and JFDI.

For now, I’m going to take you back to the pre-course work studying I should be doing and introduce you to the ‘Human-Change’ wisdom of William Bridges. Bridges states …

“The journey is inevitable, however you can see the journey as a mere inconvenience, an unwelcome interruption to your live that’s to be kept as short as possible, OR you can see it as an opportunity to look around, to learn, to see new things”

Bridges also defines the difference between ‘new starts’ and ‘new beginnings’, where a new start takes place on a schedule as a result of a decision being made and new beginnings follow the timing of the heart and mind. We, as humans, have this innate need to change when we welcome in a new year – even more so this year at the start of a new decade. Will you chose a new start? or a new beginning?